EACC are investigating The Former Mp of Embakasi South Hon Musili Mawathe who has been distributing bursaries using his pictures and Wiper Party Colors, according to Cdf regulations and act no Mp should distribute the  bursary with his picture as the bursaries are the public documents.

He distributed these forms 2 days before Supreme Court ruling currently he has distributed over 15,000 bursary forms using it as campaign tool.

We congratulate NG-CDF headquarters who have suspended these bursary forms and we are now appealing to Chebukati the chairman of IEBC to disqualify Hon Mawathe from contesting in the forth coming by elections due to misuse of public funds and illegal distribution of bursaries.

April 5th 2019 . hon Mawathe is going to usa where he is facing a child abuse case and divorce. 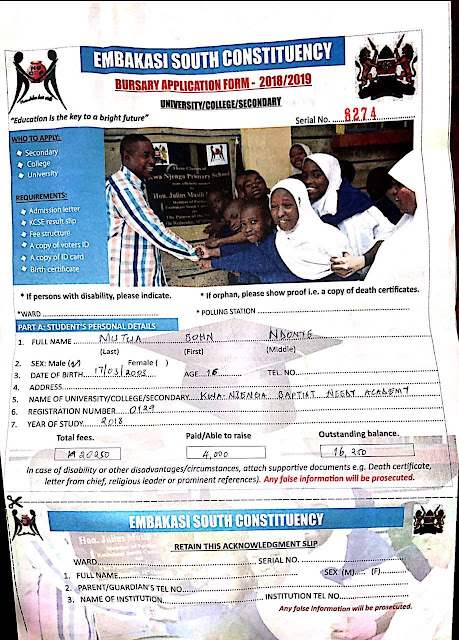 ANOTHER GREAT ARTICLE:  Next On Ringo: Brenda Is Kidnapped By Diego, Diego Asks Bruno To Take Brenda And Make Her Disappear